Puppy Love Mickey Mouse and Minnie Mouse Animation Drawing (Walt Disney, 1933).
Mickey’s visit with Minnie doesn’t turn out quite as expected, when his gift of a heart-shaped box of chocolates contains a bone instead of candy! How did that get there? Well, Pluto knows!
Here’s a great original 12 field 2-peghole animation drawing from this fun short, directed by Wilfred Jackson and released on 9/2/33. The art is in graphite with nice red and green pencil highlights; the full-figure sizes are 3.75″ and 3.25″. The number 526 is written in the lower right corner. 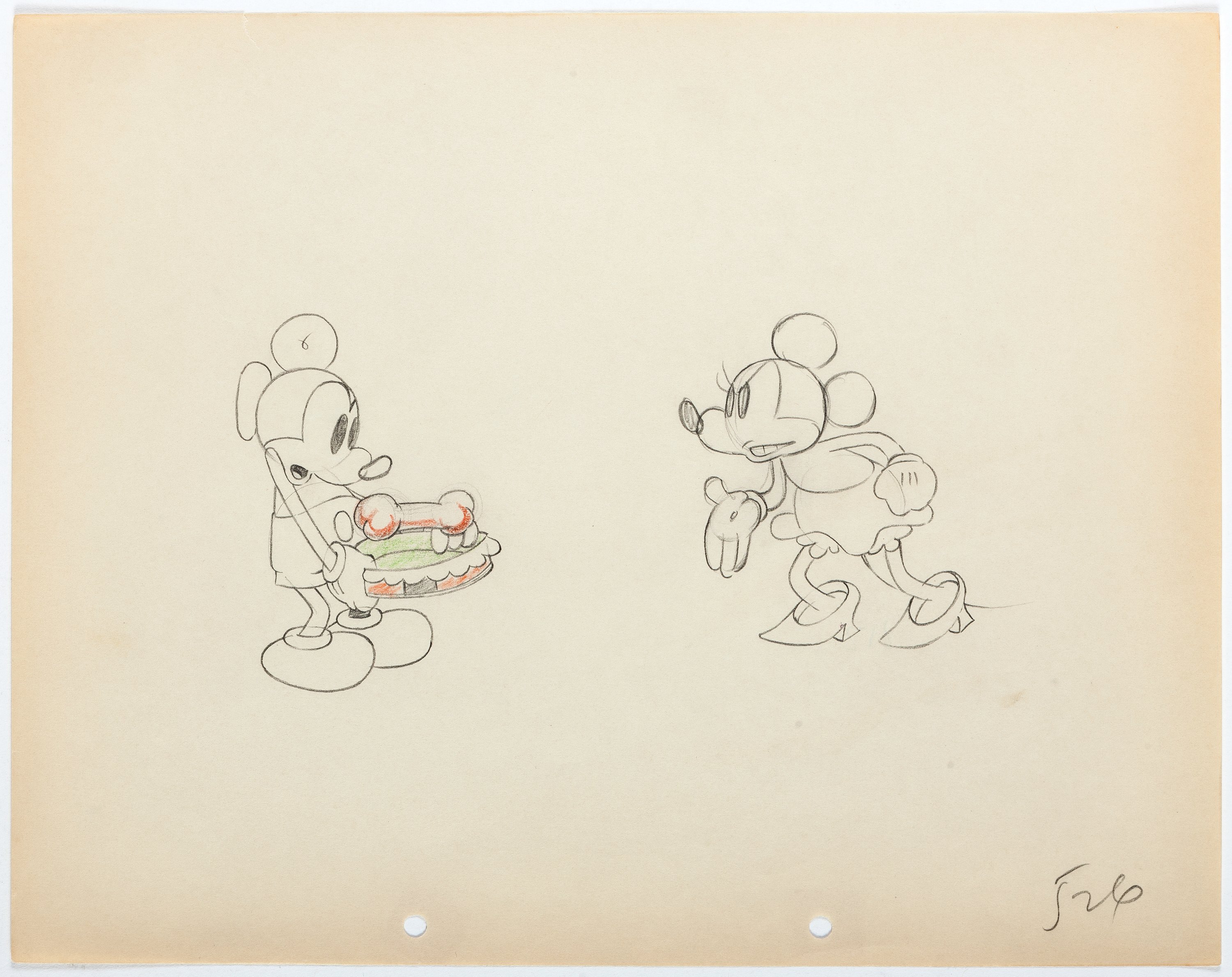 Building a Building Mickey Mouse Animation Drawing (Walt Disney, 1933).
Crane operator Mickey stops for his fish sandwich lunch break in this original 12 field 2-peghole animation drawing. This Dave Hand-directed short was first released on 1/7/33, and received an Academy Award nomination for Best Animated Short (it lost to Disney’s Three Little Pigs). This is a great, well-centered image of our Main Mouse as he debones the fish already placed between the two bread loaf halves, drawn in graphite with nice red and yellow pencil highlights on the sandwich. You can find it at the 3:47 mark in online postings. Overall image size is 4.5″ x 4″, not counting the “ghost” image of the fish skeleton’s movement, lightly drawn in blue pencil. 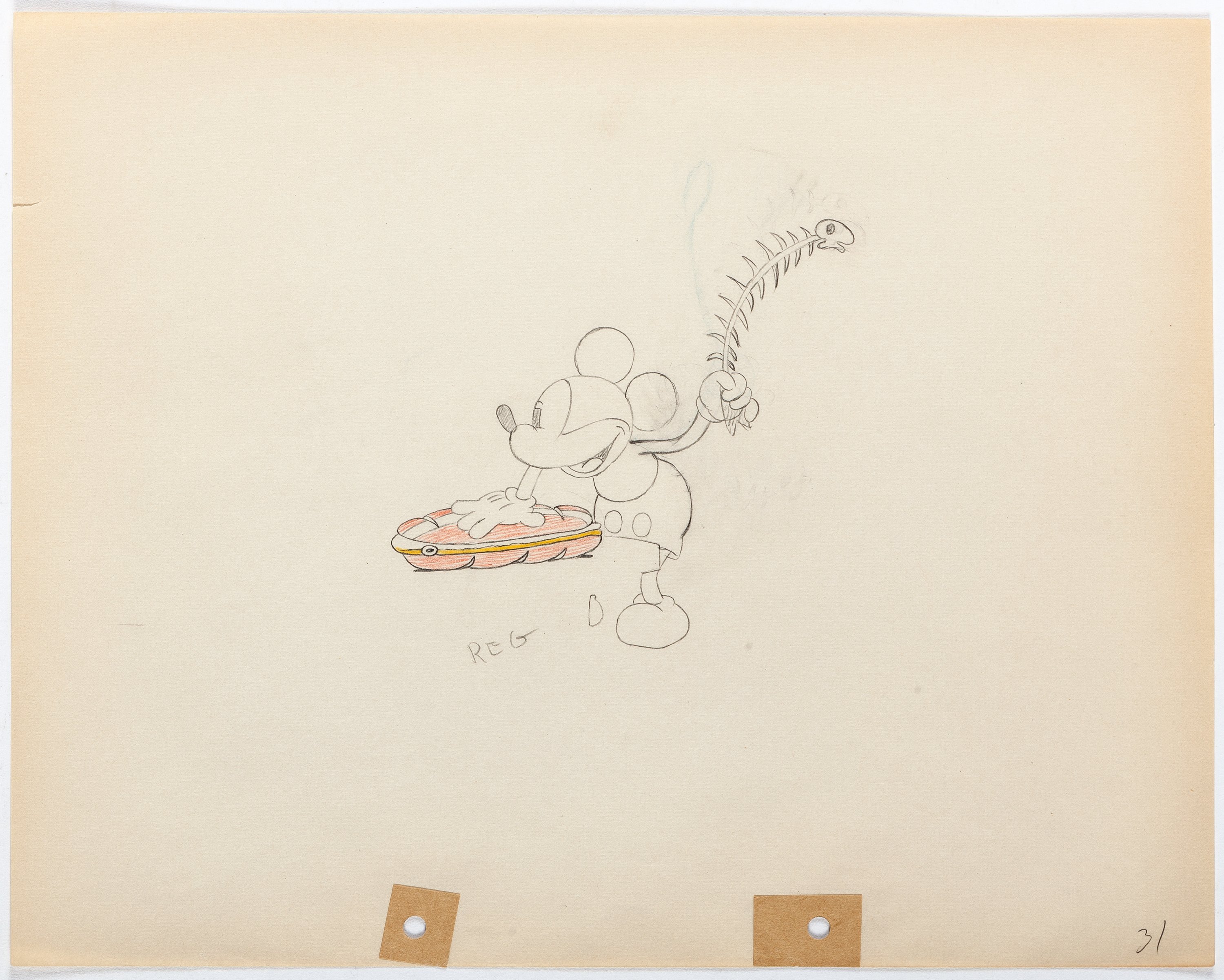 Mickey’s Garden Mickey Mouse Animation Drawing (Walt Disney, 1935).
Mickey’s garden is being invaded by insects in Walt Disney’s 1935 animated short, Mickey’s Garden, directed by Wilfred Jackson and released on 7/13/35. In an attempt to stop the invasion and rid his garden of the pesky pests, Mickey uses insecticide, but accidentally gets dosed by his own bug spray, after which he begins having wild hallucinations. In this original animation drawing, we see Mickey with his bug sprayer. Disney Legend Inductee and one of “Walt’s Nine Old Men” Ollie Johnston did the layouts for this short while Walt Disney provided the voice for Mickey Mouse. The image was rendered in graphite with color pencils on 12 field 2-peghole animation paper. 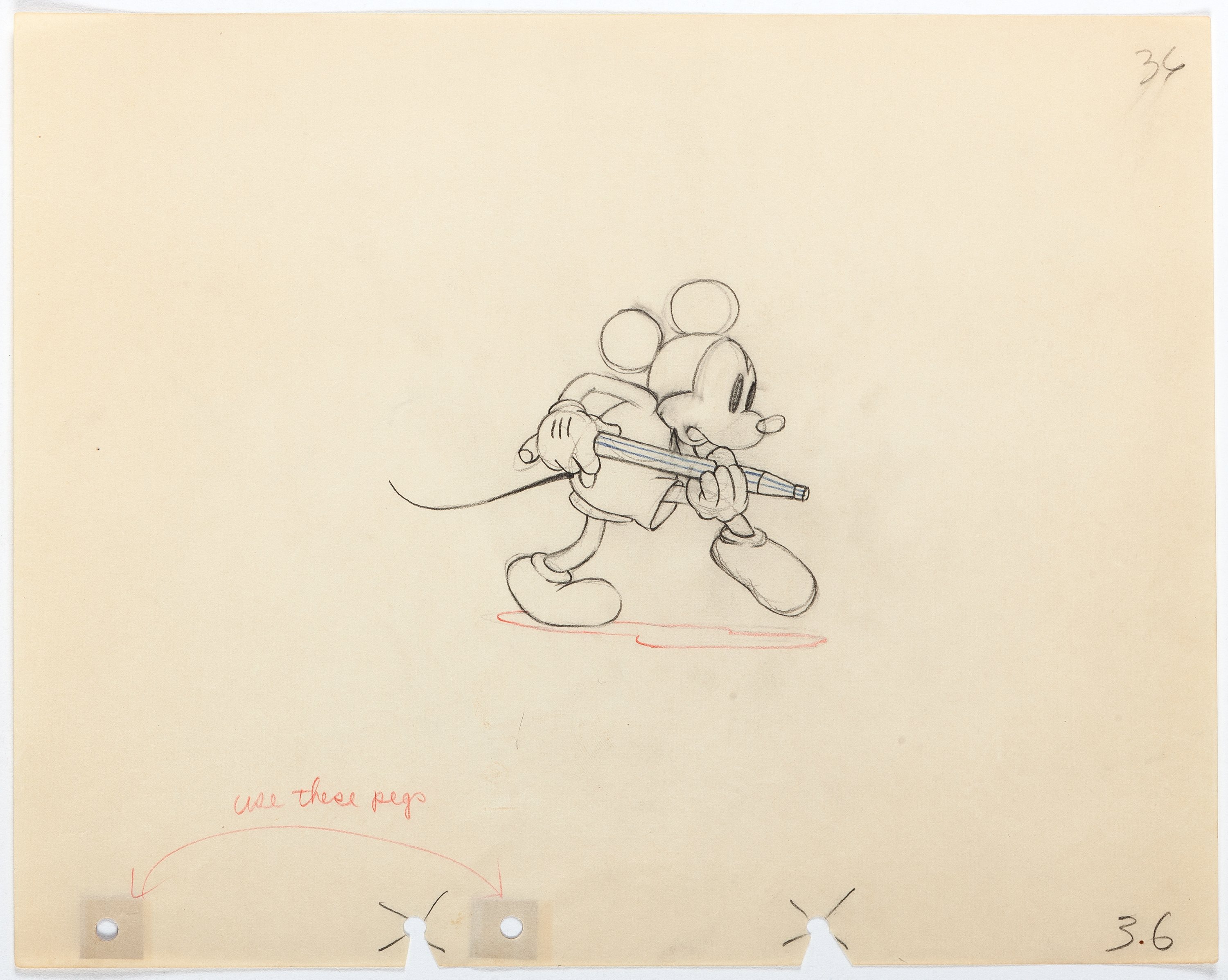